13 Of The Worst Date Stories We've Ever Heard

burrow18ref.dev3.develag.com/sitemap.xml The rest of the walk back was spent listening to him talk about how he and his friends always do that between shovelling pieces of smoked salmon in his mouth. I was SO ready for bed by the time we got to his house, but JK there was no bed for me and apparently not even a couch. Instead, he led me to a sleeping bag wedged between a treadmill and a toy box in a basement that looked like it was straight out of a horror movie.

We dated for a couple of months until I was unceremoniously ghosted. She handed me the pants and asked me to look inside. There it was, on one of the last artifacts of our crappy relationship: I wordlessly gave the woman her toonie back, threw the soiled jammies in a sewer and collapsed in laughter with my two best friends.

So, she flew back, and my then-boyfriend and I decided we would take on the hour journey. Everything was going totally fine, until one particular pit stop. I went into a cheese shop in Quebec, solo, and came out to find him scratching at the hood of the car with the back of the keys.

I asked him what the hell he was doing, and he said he was trying to get bird poop off of the hood. Like, fine, but with the back of the keys?! Needless to say, he left a pretty noticeable mark in the paint, and we spent the rest of the drive stressing about how we were going to fix it and what we were going to say to my dad who was waiting for us in Ottawa. We ended up deciding that I would take the fall, because my dad had to love me, you know? When I told him, he asked me how I could be so stupid. Let me preface this story by disclosing that this experience happened during a dark, dark period of my love life.

Her co-worker was with a group of his pals, and one of them was particularly intoxicated and tragic: I was trying to be polite and made small talk about how relationships are the worst la la la la.

I still cannot understand why on Earth I gave this man my number, but before we parted ways, I forked over my digits. In the second stupid move of this story, after he texted me, I agreed to go on a date with this weirdo.

At the end he tried to kiss me so I dodged, tripped over a curb, and broke my fibula while falling into traffic. The guy got down in the road with me, moved my hair behind me ear and said, 'We could tell people that we fell in love. 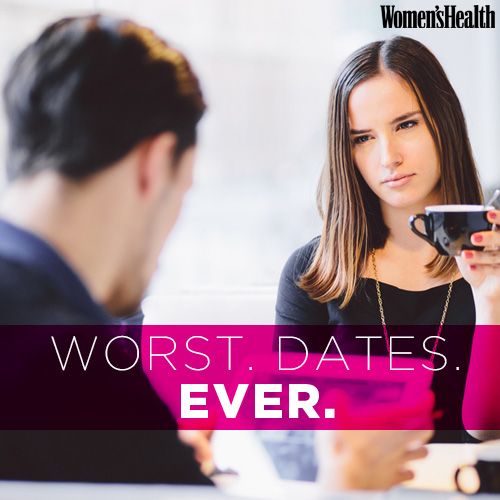 He looks at me with a shrug and goes 'Eh!? I complimented his American traditional style tattoo and his response was: We had been texting casually for a few weeks. No big deal, I thought, I needed a ride. We went to dinner and it was very nice. I'd just moved to Manchester, the dodgy end, and I'd also met a lovely German guy.

We went on a date and he wanted to walk me home after I'd made a lot of fuss about the area I lived in. As we turned the corner the street was lit up with blue flashing lights.

The sirens were echoing off the Victorian brick walls and in the distance I saw police tape flickering in the wind. As we edged closer, my fingers gripped his tighter as I realised that the tape was wrapped around my house. And the sirens were calling out to me! He thought it was hilariously coincidental until I said: A gang had been chasing him and he ran up to our house to try and get in but no one had opened the door quick enough. The guy took me to stay at my friends, but I never did hear from him again….

We'll send you a link to create a new password.

He was wearing a shark tooth necklace for starters. Is he dealing drugs? So they started talking to me like I was the long-lost girlfriend — showing me pictures of their holiday, chatting about their son — it was seriously weird — although they were an absolute delight. Said boy then took me upstairs to his very teenage bedroom, and talked me through the photos on his wall, and showed me his piano.

He even started playing it for me. So I ended up having sex with him We'd met on Tinder and though we'd got on well there was something holding me back from pinning down a date. But after two cancelled meet-ups I'd agreed to drinks - cocktails. When I arrived I was relieved - he looked nice and had a drink ready for me.

We chatted away for a while until he got onto his recent flat move. He hated where he lived but he'd had to move fast as fast as possible, he said. It sounded dubious, so out came the journalist in me, and after a lot of probing about why he'd moved so swiftly, the story came flooding out. I'd already judged, of course. It transpired he hadn't got on with an old housemate who'd been hitting on his ex. So he'd taken drastic measures, and I mean drastic.

On a whim one night on a walk home he'd passed a butchers and volunteered to take some end of day off-cuts home. Said off-cuts were two pigs heads, which he'd put in his housemate's bed for him to find on his return home. His landlord had thrown him out shortly after. I felt like I was on a date with a member of the mafia.